It is with profound gratitude and a deep sense of loss that we remember former Illinois Attorney General, Jim Ryan. Illinois Children’s Healthcare Foundation (ILCHF) exists because of Jim Ryan. Countless children and families have benefitted from the work of our grantee partners because of Jim Ryan. As Peter E. Doris, MD, one of three founding ILCHF Board members, former Board Chair, and Emeritus Board member said of his dear friend, “For the 40 years I had known Jim Ryan, he always put the needs of others first. He was well aware that healthy children are our future.” 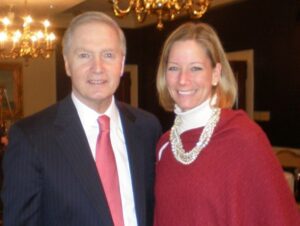 As Attorney General, Jim Ryan oversaw the lawsuit against an insurance carrier which led to the creation of ILCHF. That lawsuit was ultimately settled for $124.6 million. As settlement negotiations were proceeding a decision had to be made as to what would be done with the settlement funds. Here are Jim Ryan’s notes for a 2005 ILCHF Annual Report that capture the decision-making process that led to the creation of ILCHF:

“When we knew that an agreement had been reached and the funds would be coming, we pulled the staff together and thought a lot about where they should be focused. Without exception, we all thought it should go towards health issues facing children in our state.”

“I got the word that we needed to get the details finalized for establishing the organization that would receive the funds. I knew we should have at least three people heading it up – a doctor, a corporate executive who knew the business end of it, and a child advocate.”

“I put calls into the three people who fit those categories and I couldn’t believe it when all three of them answered their phones that day – how often do you ever get all of the people you’re trying to reach on the phone the day or time you call them.”

Those three founding ILCHF Board members who answered Jim Ryan’s call were Peter E. Doris, MD, C. William Pollard, the CEO of ServiceMaster Company, and Jerry Stermer, the founding President of Voices for Illinois Children. Since its inception in 2002, ILCHF has grown from 3 board members to a highly diverse 19-member board of individuals from across the State with a myriad of experiences and talents all of whom continue to be focused on the Foundation’s vision that “every child in Illinois grows up healthy.” We were privileged to have Jim serve as an ILCHF Board member from 2005 – 2012. In December 2012, in recognition of Jim’s role both in the creation of and ultimate service on the Board of Directors of ILCHF, Jim was named as an Emeritus Board Member, one of only three such members in the history of the Foundation.

As the architect for the creation of ILCHF, Jim wanted to help as many children as possible. With our continued focus on both the oral health and mental health needs of children and their families, as we approach our 20th anniversary, ILCHF has awarded more than 700 grants totaling nearly $127 million. These investments have enabled our grantee partners to meet the needs of children in all 102 counties in the State of Illinois. While there is still so much to do, we could not have done any of it without the inspiration and dedication of Jim Ryan. There really are no words to adequately capture the depth of our gratitude for Jim’s wisdom, compassion, and drive to help others.

To our friends, partners and colleagues, thank you for the work you are doing each day so that every child in Illinois can grow up healthy. To Jim’s wife, Marie, and his children and their families, on behalf of our Board of Directors, and our staff, please accept our deepest condolences on Jim’s passing.

Sorry, the comment form is closed at this time.